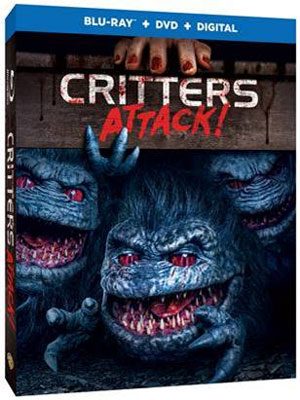 Warner Bros. Home Entertainment has just unveiled details about the upcoming release of Critters Attack! on Blu-Ray Disc and DVD this summer.

The feeding frenzy begins in this newest entry in the bloody, live-action, horror/sci-fi film series as Dee Wallace, who starred in the original Critters as Helen Brown, will sink her teeth into the franchise for a second time in the mysterious role of Aunt Dee. Inspired by the film series from the ’80s and ’90s, Critters follows 20-year-old Drea (Tashiana Washington), who reluctantly takes a job babysitting for a professor of a college she hopes to attend. Struggling to entertain the professor’s children Trissy (Ava Preston) and Jake (Jack Fulton), along with her own little brother Phillip (Jaeden Noel), Drea takes them on a hike, unaware that mysterious alien critters have crash-landed and started devouring every living thing they encounter.
While being tracked by the ravenous critters, Drea and the kids encounter an adorable, seemingly harmless female critter named Bianca, an exiled royal fleeing the critter race. As the critters converge on the college campus, Drea and the kids, who are now inextricably linked to Bianca, rush to head them off. Will Drea discover her inner badass, and will it be enough to stop the critter onslaught? And is the critter princess as innocent as she seems?

Aside from the feature film itself, the release will also contain a Scene Specific Commentary with Director Bobby Miller and a Critter, as well as the Featurete “The Critter Ball”. Further, look for “Engineering Gore; Designing Critters” and “Critters: An Out-of-this-World Experience”, both Featurettes that will take you behind the scenes of the movie.