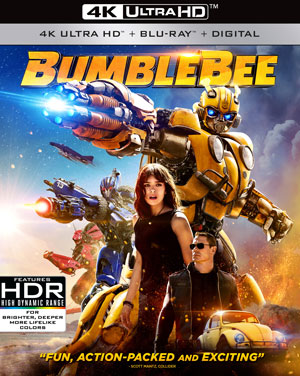 Paramount Home Entertainment has added the latest Transformers movie, Bumblebee to its roster, scheduling a 4K UHD, Blu-Ray Disc and DVD version for release in April.

Cybertron has fallen. When Optimus Prime sends Bumblebee to defend Earth, his journey to become a hero begins. Charlie Watson (Hailee Steinfeld), a teenager trying to find her place in the world, discovers and repairs the battle-scarred robot, who’s disguised as a Volkswagen Beetle. As the Decepticons hunt down the surviving Autobots with the help of a secret agency led by Agent Burns (John Cena), Bumblebee and Charlie team up to protect the world.

Aside from the feature film, the release will also come with a hist of extras, including the Sector 7 Archive, featuring the segments Agent Burns: Welcome to Sector 7 and Sector 7 Adventures: The Battle at Half Dome, an all-new Motion Comic.

You will also find selection Deleted and Extended Scenes on the release, along with Outtakes, and the Featurette Bee Vision: The Transformers robots of Cybertron.

Further, the release will offer up the multi-part Featurette Bringing Bumblebee to the Big Screen, with segments that are called The Story of Bumblebee, The Stars Align, Bumblebee Goes Back to G1, Back to the Beetle and California Cruisin’ Down Memory Lane.