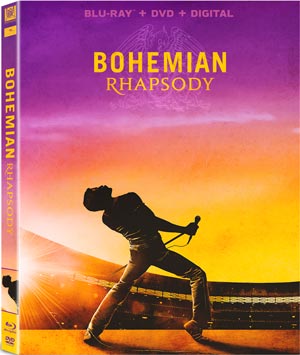 Twentieth Century Fox Home Entertainment has scheduled the release of the Queen biopic Bohemian Rhapsody for release on 4K UHD, Blu-Ray Disc and DVD, planning to bring the film to stores in February.

Bohemian Rhapsody is an enthralling celebration of Queen, their music, and their extraordinary lead singer Freddie Mercury (Rami Malek), who defied stereotypes and convention to become one of history’s most beloved entertainers. Following Queen’s meteoric rise, their revolutionary sound and Freddie’s solo career, the film also chronicles the band’s reunion and one of the greatest performances in rock history.

Filled with the iconic and heart-pounding music of Queen and Freddie Mercury, the release will feature the film itself, along with some cool extras. Among them is the Complete Live Aid Movie Performance that has not been shown in theaters. It features two never-before-seen songs (“Crazy Little Thing Called Love” and “We Will Rock You) packed into a 22-minute collective experience recreating the original event.

Also included is Becoming Freddie, an interview featurette with Rami Malek as he discusses this pivotal role.

The Look and Sound of Queen and Recreating Live Aid are two more featurettes included on the release.