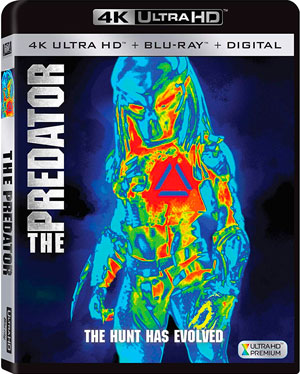 The hunt has evolved—and so has the explosive action—in the next chapter of the Predator series. Now, the most lethal hunters in the universe are stronger, smarter and deadlier than ever before…and only a ragtag crew of ex-soldiers and an evolutionary biology professor can prevent the end of the human race.

Aside from the feature film, coming with all the high-end bells and whistles you’d expect, such as an HDR transfer and Dolby Atmos audio on UHD, or DTS-HD Master Audio 7.1 audio on Blu-Ray Disc, the release will also feature a number of bonus features.

First among these will be a selection of Deleted Scenes, supplemented by Featurettes with titles such as A Touch of Black, Predator Evolution, The Takedown Team and Predator Catch-Up. To round out the release, you will also find a Gallery on the disc.