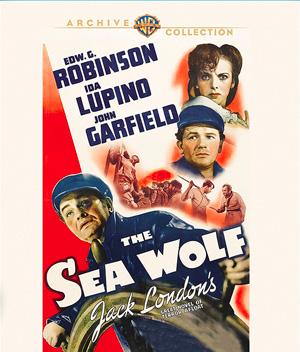 Fans of classic movies will rejoice in hearing that Warner Brothers Home Entertainment has just added the 1941 classic adaptation of JAck London’s novel, The Sea Wolf, to its cherished Warner Archive Collection, making it available next week.

A true classic, The Sea Wolf is one of the great Warner Bros. movies that has existed only in truncated form for 70 years but it has finally been restored to its original length as first released in 1941, with 14 minutes of footage that has long been thought completely lost, reinserted into the film, painstakingly remastered from a 4K scan for the best possible result.

The Sea Wolf stars Edward G. Robinson, Ida Lupino, and John Garfield and is directed by Michael Curtiz (Casablanca, The Adventures of Robin Hood). It was one of Warner Bros. highest-grossing titles of 1941, well-received by both critics and audiences. Robert Rossen’s adapted screenplay, which contemporized the story by adding a strong anti-fascist component by making the main character a thinly disguised figure reminiscent of a European dictator, is still considered the benchmark version of Jack London’s best-selling psychological thriller.

In order to present a 1947 ‘sea-faring’ double feature re-issue with 1940’s The Sea Hawk, Jack Warner cut both films to accommodate more daily showings in theaters. The 14 minutes from The Sea Wolf were physically edited and removed from the original camera negative and no 35 mm copies were thought to have remained until a recent extensive archival search yielded a thought-lost nitrate positive fine grain master made at the time of the film’s production. The latter became the basis for the new 4K scan which was used by Warner Bros. Motion Picture Imaging to meticulously restore the picture. An audio restoration was also performed to take full advantage of the rich musical underscoring by Erich Wolfgang Korngold.

The release also includes some bonus features, such as the Original Trailer remastered in HD and a 1950 Condensed Radio Production from the “Screen Director’s Playhouse” series starring Edward G. Robinson and directed by Michael Curtiz. The radio program also provides a rare glimpse at witty banter between Robinson and Curtiz, who had previously collaborated on several Warner Bros.’ classics.