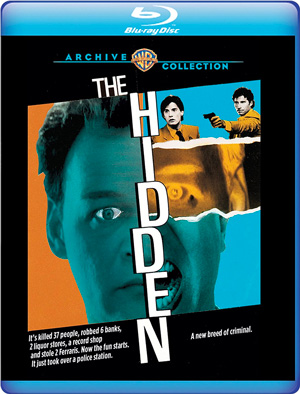 Warner Brothers Home Entertainment has just announced that the next batch of additions to the Warner Archive Collection has arrived, including the 1987 horror flick The Hidden for the first time on Blu-Ray Disc.

Simply one of the greatest Crime-Horror-Science Fiction-Cop-Buddy flicks produced in the era of neon and big hair, The Hidden remained, well, hidden, upon its initial release only to become a late-night cable king thanks to its verve, splash, clever non-CG FX work along with some great performances both big and small. Something is turning the law-abiding citizens into psychopathic killer criminals and L.A. police detective Tom Beck (Michael Nouri) is flummoxed. Enter odd FBI agent Lloyd Gallagher (Kyle MacLachlan) with the simple explanation. Alien demonic possession. While a series of talented character vets (Clu Gulager, Chris Mulkey) and up-and-comers (Richard Brooks, Claudia Christian) leave their marks upon the scenery, the one-two punch of Michael Nouri (playing 80s rogue cop) and Kyle MacLachlan (playing “not from around here” as only he can) make this b-movie a blockbuster.

The movie’s Original Theatrical Trailer in high definition is also be included.