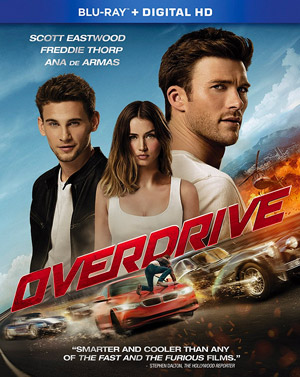 Paramount Home Entertainment announced the upcoming release of the thrilling action adventure Overdrive from the writers of 2 Fast 2 Furious and the director of Taken, bringing the movie home in November.

Scott Eastwood and Freddie Thorp star as legendary car thieves who are caught in the act of stealing from notorious crime boss Jacomo Morier.  In order to win back their freedom, they’re put to the ultimate test – the theft of a priceless car from Morier’s sworn enemy.  While putting together a crew to pull off the daring heist they’re joined by two beautiful women (Ana de Armas & Gaia Weiss) who are more dangerous than they look.  The team has one week to put the plan in motion, steal the car, and make their escape or lose everything, including their lives.

The release will also include a series of Behind-the-scenes Featurettes that delve into the film’s action-packed story, cast, and, of course, sensational high-performance cars.

Revv up your engines because this joyride lands on Blu-Ray Disc and DVD on November 7 and can be yours for $24.99 and $19.99, respectively.