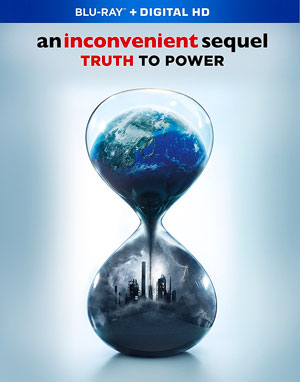 More important than ever, Paramount Home Entertainment has added An Inconvenient Sequel: Truth to Power to its line-up, scheduling a Blu-Ray and DVD release of the eye-opening, acclaimed documentary about climate change for late October.

Ten years after the Academy Award®-winning An Inconvenient Truth brought climate change to the forefront of mainstream culture, the 2017 Environmental Media Association (EMA) Award-winning documentary An Inconvenient Sequel: Truth to Power follows former Vice President Al Gore as he continues his tireless fight, traveling around the globe to educate and inspire the next generation of climate champions.  This “daring, urgent and exhilarating follow-up” (Josh Dickey, Mashable) shows that while the stakes have never been higher, the solutions to the climate crisis are still within our reach.

The Blu-Ray version of An Inconvenient Sequel: Truth to Power includes over 40 minutes of in-depth bonus content. Join Al Gore and filmmakers for a behind-the-scenes discussion about why they felt it was time for a follow-up to the acclaimed documentary An Inconvenient Truth.  Plus, learn more about the urgency of global climate change and the tools we have at our disposal that can help make a difference.

Both the Blu-ray and DVD will be available in packaging featuring covers made of Clay-Coated News Back (CCNB) from 100% recycled content, a 100% recycled chipboard tray to hold the disc, and an insert printed on 100% recycled coated paper.