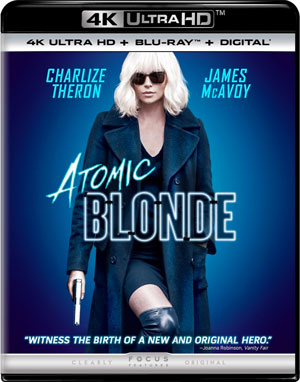 Adapted from Antony Johnson’s graphic novel, Atomic Blonde features Charlize Theron as elite MI6’s most lethal assassin and the crown jewel of her Majesty’s secret intelligence service, Lorraine Broughton. When she’s sent on a covert mission into Cold War Berlin, she must use all of the spycraft, sensuality and savagery she has to stay alive in the ticking time bomb of a city simmering with revolution and double-crossing hives of traitors. Broughton must navigate her way through a deadly game of spies to recover a priceless dossier while fighting ferocious killers along the way in this breakneck action-thriller
Aside from the movie itself, the release will also include a Commentary Track with Director David Leitch and Editor Elisabet Ronaldsdottir, as well as a selection of Deleted and Extended Scenes.

Featurettes will take you behind the scenes of the movies, such as Welcome to Berlin, showing how the ultimate setting for a Cold War spy thriller, Berlin becomes a character of its own.

In Blondes Have More Gun, see what it took for Charlize Theron to fully transform herself into the tenacious character of Lorraine Broughton, while Spymaster explains how David Leitch spins the spy genre on its head through exemplary action sequences and complex characters. Hear from cast and crew what it was like to work with this cutting edge director.

Anatomy of a Fight Scene gives Director David Leitch the opportunity to break down the incredibly detailed long-take stairwell shot in this anatomy of a fight scene.