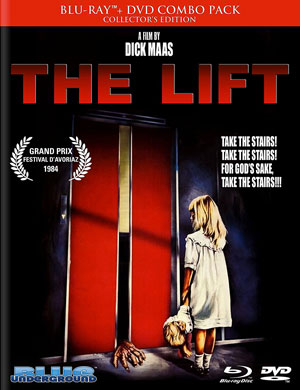 Blue Underground has just added another horror cult classic to its line-up, bringing the 1983 moive The Lift to Blu-Ray Disc in October.

There is something very wrong with the elevator in a stylish office high-rise. The passengers never end up on the floor of their choice. They end up dead! When Felix (Huub Stapel), an inquisitive repairman, investigates the faulty deathtrap, he discovers that something other than malfunctioning machinery is to blame. Some dark, distorted power has gained control of the elevator for its own evil design. After his horrifying discovery is given the shaft by the authorities, he joins a nosy female journalist to battle the unholy force inside the Lift!

In addition to the movie itself, the release will also come with a Commentary Track by Writer/Director Dick Maas and Editor Hans van Dongen, as well as an Interview with the film’s star Huub Stapel.

Further, look for ”Long Distance” on the release, a 4-minute short film by Dick Maas from 2003.

The release is rounded out by the original Dutch Trailer, the U.S. Trailer and a Poster and Still Gallery. In addition, the release includes a Collectable Booklet with new essay by writer and filmmaker Chris Alexander.