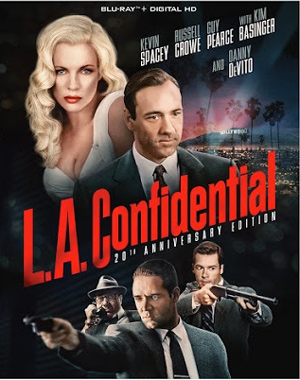 To celebrate the 20th Anniversary of Curtis Hanson’s L.A. Confidential, Twentieth Century Fox Home Entertainment is preparing a new release of the movie on Blu-Ray Disc and DVD.

Further, the release contains ”Off the Record”, a series of Vintage Cast/Creator Interviews, as well as Director Curtis Hanson’s Photo Pitch.

Also look for The L.A. of L.A. Confidential Interactive Map Tour and a 5.1-channel Music-Only Track showcasing Jerry Goldsmith’s grandiose score. The release is rounded out by Trailers and T.V. Spots.

L.A. Confidential will arrive on September 26 and can be yours on Blu-Ray Disc or DVD.