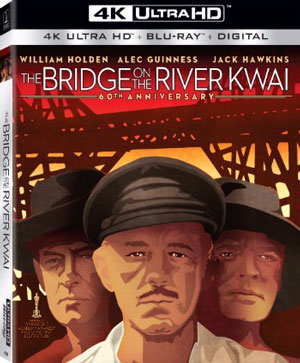 Sony Pictures Home Entertainment has unveiled specs this morning, about the upcoming 4K UHD release of the epic WWII drama The Bridge on the River Kwai, scheduling its release for October.

Offering a ultra high definition presentation of the feature film itself, the release also includes the Blu-Ray version of the movie, which comes with a host of bonus features, such as the Crossing the Bridge Picture-in-Picture Graphics Track, as well as the Making of The Bridge on the River Kwai Featurette.

Also included is The Steve Allen Show with William Holden & Alec Guinness and The Bridge on the River Kwai Premiere Narrated by William Holde. Further, you will find the Featurette Rise and Fall of a Jungle Giant on the release, as well as the USC Short Film Introduced by William Holden and An Appreciation by Filmmaker John Milius.

The release is rounded out by a Photo Gallery and the film’s Theatrical Trailers.

The Bridge on the River Kwai will arrive in stores on October 3 as a 4K UHD release for the first time.