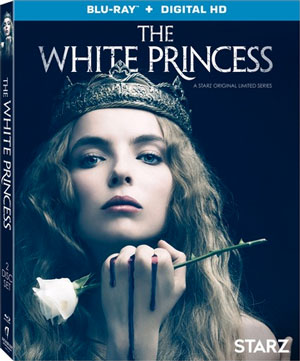 The White Princess , the follow-up to the acclaimed television series The White Queen, has landed on Lionsgate Home Entertainment’s release roster and has been scheduled for release on Blu-Ray Disc and DVD in late August.

This eight episode series sees England ostensibly united by the marriage of Elizabeth of York/Lizzie and King Henry VII, but their personal and political rift runs deep and the divide between them threatens to tear the kingdom apart once again. “The White Princess” is a tale of power, family, love, and betrayal, which charts one of the most tumultuous times in British history uniquely from the point of view of the women waging the ongoing battle for the English throne.

The Blu-Ray version will feature a 1080p high definition version of the show in its original 1.78:1 aspect ratio, complete with a Dolby 7.1 TrueHD audio track.

No bonus features have been announced for the release but you can own The White Princess on August 29 when it arrives on Blu-Ray Disc for $49.99 on on DVD for $44.98.