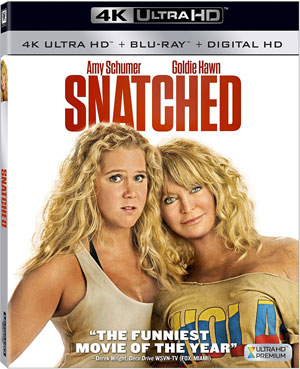 Twentieth Century Fox Home Entertainment has just added the comedy Snatched to its release line-up, scheduling a 4K UHD, Blu-Ray Disc and DVD version for an appearance in early August.

Amy Schumer and Goldie Hawn get more action than they bargained for in the mother of all comedies! After her boyfriend dumps her on the eve of their exotic vacation, impetuous dreamer Emily Middleton (Schumer) persuades her ultra-cautious mom, Linda (Hawn), to travel with her to paradise. When the trip takes an unexpected turn, the polar opposite mother/daughter duo realize they must settle their differences and work together to escape the outrageous jungle adventure they’ve fallen into.