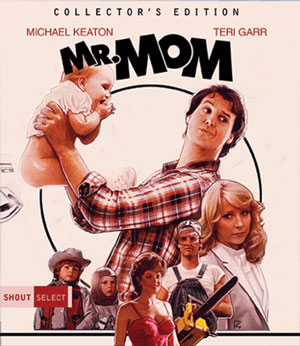 Shout! Factory has added a Blu-Ray Disc version of the 1983 comedy Mr. Mom to its roster, scheduling the Collector’s Edition Blu-Ray in September.

While Caroline Butler (Teri Garr) re-enters the workforce and becomes the rising star of her advertising agency, her newly unemployed husband Jack (Michael Keaton) finds himself a new job …as a stay-at-home dad! But if Jack thinks his old career in the automotive industry was tough, he has no idea what’s waiting for him at home: the ins and outs of dropping the kids off at school, soap operas, woobies, babies with chili, a clean-up on aisle seven and a vacuum cleaner named “Jaws.” Not to mention the seedy neighborhood drama!