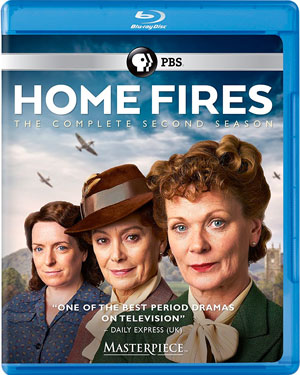 PBS Distribution has just announced the upcoming release of their Masterpiece television series Home Fires: Season 2 to arrive in stores in April, continuing the inspiring story of women stepping up to the plate in the midst of World War II.

Home Fires follows the story of a group of inspirational women in an English village during World War II. As the conflict takes hold and the separation from their husbands, fathers, sons and brothers becomes more painful, the women rely on one another and the friendships forged through village life. Samantha Bond (Downton Abbey), Clare Calbraith (Downton Abbey), Claire Rushbrook (Whitechapel) and Francesca Annis (Reckless) head the extraordinary cast.

The release will include all six one-hour episodes that make up the show’s second season. Though no bonus features have been announced at this time, the release will most likely feature a small number of interview and production featurettes, the same way other PBS releases are presented.