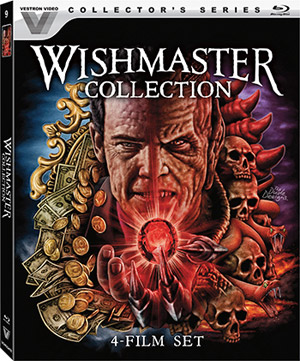 Lionsgate Home Entertainment and Vestron Video have just announced the upcoming release of the Wishmaster Collection, a limited edition Blu-Ray Disc release that will feature all four Wishmaster movies.

Magically powerful and supernaturally evil, the ancient entity known as the Djinn can grant your wildest dreams — and unleash your darkest nightmares. Follow the Wishmaster’s bloodcurdling quest to devour souls and plunge the world into eternal damnation in this fright-filled collection of all four horror-fantasy favorites.

Arriving on Blu-Ray for the first time, this 3-disc Vestron Video Collector’s Series release will not only feature all four film, restored and remastered, but also a host of bonus materials.

Isolated Score Selections and an Audio Interview with composer Harry Manfredini will also be included on the disc.

Wishmaster 2: Evil Never Dies will come with an Audio Commentary with writer/director Jack Sholder, as well as a Trailer and a Still Gallery.

The Wishmaster Collection will be in stores on March 28 with a $49.99 sticker price.