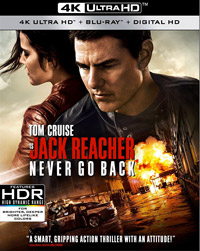 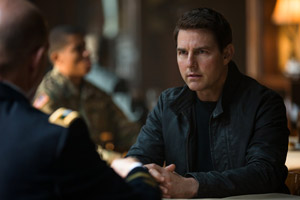 Recently, I grabbed Lee Child’s novel Never Go Back and as I had made my way halfway through the novel, I found out that a movie was in the works. I enjoyed the book a great deal so I was eager to check out the release when Paramount Home Entertainment dropped the 4K UHD version in my lap.

Jack Reacher (Tom Cruise), a former Military Police Major, is drifting through America. Without a residence, without belongings other than the clothes on his back, he is living outside the system.

One day, he plans to visit a casual acquaintance, Susan Turner (Cobie Smulders), the Major now leading his old outfit, but upon arrival in his old headquarter, he finds that she has been arrested on suspicion of treason. Reacher tries to find out what happened but is quickly brushed off and then incriminated in the case and arrested himself. All of it without a shred of actual evidence. 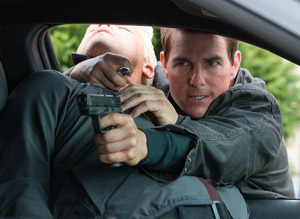 Suspecting foul play, Reacher has never been one to offer the other cheek and he quickly decides to take the investigation into his own hands. Breaking himself and Turner out of jail is only the first step on a road that is fraught with lies, deception, explosions, and lots and lots of bullets.

One of the biggest complaints I have with the Jack Reacher film adaptations is that Tom Cruise is just no Jack Reacher. The 5’7” actor hardly resembles the 6’5” character Lee Child describes in his books; a man who darkens doorways, whose mere presence intimidates people and who gets noticed wherever he goes. Tom Cruise’s boyish charm and diminutive figure simply never manages to evoke a Reacher kind of imposing presence or imperturbable cool. As such, his actions never have the same import or impact compared to Reacher’s.

But there’s another key issue I have with this movie in particular. When someone licenses a novel and plans to make a movie out of it, why do they feel they have to change every detail about it? Authors put lots of time into properly plotting their stories. In mysteries and thrillers, in particular, little bits of information and plot points are meticulously pieced together in order to create a gossamer of events that weave an intricate fabric of the story as a whole. 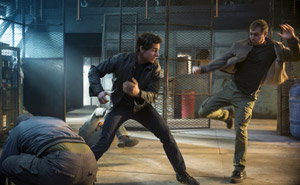 In the case of Never Go Back, someone decided to take a hacksaw to the material, cut out everything that makes sense and simply throw together some random events that have nothing to do with the original story, keeping only the basic plot outline and characters in place. It is a despicable hack-job.

I understand when Peter Jackson reworks The Lord of the Rings because of production limitations, because of the overall length of the material or because of the pacing, and I am okay with it, but in Never Go Back you can tell that someone sat there with a stopwatch and made sure there is an action scene every 15 minutes. It is a hideous testament to how movies have devolved into no-attention-span fast food and how studios and filmmakers have completely lost touch with the art of cinema. Never Go Back was a solid book that was perfectly plotted out, with a great overall arc, with great characters, premises, and events that fit together nicely. Nothing in the book predicated a re-write or deviation from the source material, except for the anti-climactic ending, perhaps. And yet, someone in Tinseltown thought it was a good idea to second-guess one of the great thriller writers of our time and put their own stamp on the script. 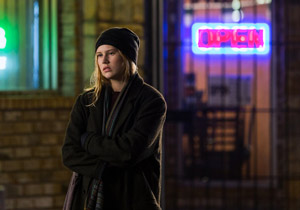 The result is a movie that not only feels like a throw-away product but a movie that makes no sense, that is excessively convenient at every turn and… who the hell wrote those dialogues? Every conversation in this film feels like it’s theater group amateur hour, some poor saps desperately trying to wring a bit of sense and emotion out of the most ridiculous lines of dialogue put in their mouths. The overacting of some of the support cast also feels amateurish and pulls the film down.

Since this is a brand-new movie, it is hardly surprising that the 4K UHD transfer presented on this release looks as impressive as one could possibly hope. With solid, deep black levels and plenty of shadow detail, the transfer also firmly holds highlights without blooming. The overall contrast, enhanced perfectly through the format’s HDR encoding, gives the image incredible visual depth. At the same time, it makes the brief flashes of digital camcorder footage in some of the action scenes so much more jarring. One would think that by now, filmmakers had learned, but alas… 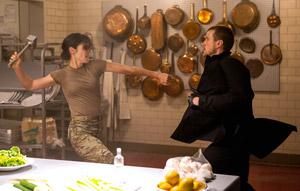 The Dolby Atmos audio track on the release is explosive and aggressive with a mix that shows slight preference to sound effects over dialogue. As such, the dynamics of the film are constantly fluctuating from moments that will almost take your head off to quiet dialogue delivery that is getting lost.

Surrounds are engaged constantly and to good effect. Bullets zipping past your head and glass shattering all around you gives the track incredible presence. The bass extension is solid but not exaggerated and the track is free of distortion or sibilance. 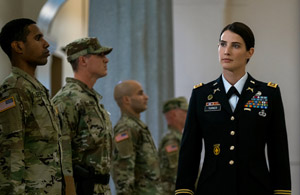 On the second disc, that also contains the Blu-Ray version of the film, you will also find a number of bonus features in the form of six featurettes that cover various aspects of the story, the movie, and the characters. For the most part, they are EPK material that server promo purposes rather than giving viewers actual insight into the production or the making of the movie.

Never Go Back is a film that, no doubt, started with good intentions and then derailed entirely until, in the end, the result resembles neither the book nor a good movie. It is a calamity from beginning to end that makes no sense and offers only little beside groan-inducing moments. If you have to give the film a try, by all means, rent it, instead of paying money for this train wreck.