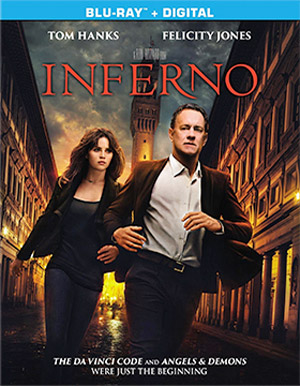 Hot on the heels of its theatrical release, Sony Pictures Home Entertainment has just added Ron Howard’s film adaptation of the Dan Brown thriller Inferno to its roster, bringing the movie to 4K UHD, Blu-Ray Disc and DVD in January.

When symbology professor Robert Langdon (Tom Hanks) wakes up in an Italian hospital with amnesia, he teams up with Dr. Sienna Brooks (Felicity Jones), and together they must race across Europe against the clock to foil a deadly global plot.

Aside from the feature film, the release will also contain a number of bonus features, such as a selection of Deleted and Extended Scenes, as well as a number of Featurettes, covering various aspects of the production, such as “Ron Howard: A Director’s Journal,” “A Look at Langdon,” “The Billionaire Villain: Bertrand Zobrist,” “This is Sienna Brooks,” “Inferno Around the World” and “Visions of Hell.”