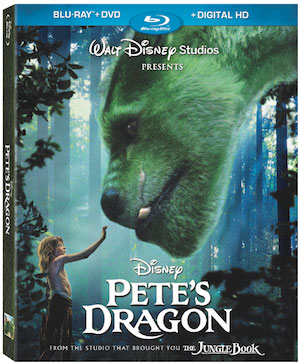 Walt Disney Home Entertainment has just added Pete’s Dragon to its fall line-up, bringing the live action remake of the classic story to Bl-Ray Disc and DVD in November.

The DVD version will offer the Featurette ”Making Magic” as the only supplement, which contains fun facts about what went into designing this spectacular, lovable dragon.

On the Blu-Ray version, fans will be rewarded much more richly, with a host of bonus features that includes the Featurette ”Making Magic” along with ”Notes to Self: A Director’s Diary” in which Director David Lowery narrates the personal diary he kept through the filming of “Pete’s Dragon” in this intimate and fascinating look at the movie’s making.

Also included are the Featurettes “Disappearing” Moments”, in which the director shares a montage of the film’s “lost” scenes, and ”Welcome to New Zealand” putting on display the wonders of New Zealand and why it’s a magical place to visit… and to make a movie.

The release also contains the Music Videos “Nobody Knows” by The Lumineers and “Something Wild” by Lindsey Stirling featuring Andrew McMahon in the Wilderness.

Further, you will find Bloopers on the disc, as well as a Commentary Track featuring irector David Lowery, co-writer Toby Halbrooks and actors Oakes Fegley and Oona Laurence.