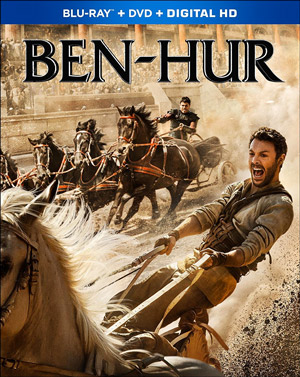 Paramount Home Entertainment has just announced the upcoming release of the epic Ben-Hur remake, scheduling a Blu-Ray Disc and DVD release for December.

“Ben-Hur” is the epic story of Judah Ben-Hur (Jack Huston), a prince falsely accused of treason by his adopted brother Messala (Toby Kebbell), an officer in the Roman army. Stripped of his title, separated from his family and the woman he loves (Nazanin Boniadi), Judah is forced into slavery. After years at sea, Judah returns to his homeland to seek revenge, but finds redemption.

While the DVD version will be entirely devoid of bonus features, the Blu-Ray edition will offer up a selection of Deleted & Extended Scenes, as well as the Featurettes ”Ben-Hur: The Legacy,” “The Epic Cast,” “A Tale for Our Times” and a closer look at ”The Chariot Race”. The release will be rounded out by Music Videos.