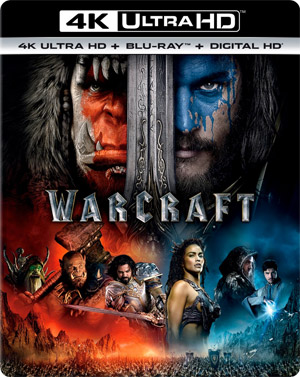 Universal Pictures Home Entertainment has added Warcraft to its roster, scheduling a 4K UHD, Blu-Ray and DVD version of the movie, based on the popular computer game franchise, for release in September.

The peaceful realm of Azeroth stands on the brink of war as its civilization faces a fearsome race of invaders: Orc warriors fleeing their dying home to colonize another. As a portal opens to connect the two worlds, one army faces destruction and the other faces extinction. From opposing sides, an unlikely group of heroes is set on a collision course that will decide the fate of their families, their people and their home.

As bonus features, the DVD version will contain Deleted Scenes along with a Gag Reel and the Origin Story. In addition, you will find The Fandom of Warcraft on the disc, delving into the history and breadth of the fandom behind the game and film, as well as the way it has influenced pop culture.

ILM: Behind the Magic of Warcraft explores the groundbreaking facial capture technology utilized by Industrial Lights & Magic to convey the emotion and depth of the visually impressive Orc characters in the film.

The Blu-Ray version will include the same bonus materials, but will further spice things up with the Bonds of Brotherhood Motion Comic that allows you to take an interactive journey through the official Warcraft graphic novel with a never-before-seen motion comic that brings the story of the film’s young heroes – Prince Llane, Captain Lothar and Guardian Medivh – to life in this unique experience.

A Five-part Documentary called “The World of Warcraft on Film” will also be included taking you behind the scenes of many of the movie’s production aspects, as well as Madame Tussauds’ Featurette, a featurette on the making of the Warcraft wax figures by Madame Tussauds.

The release will be rounded out by the Comic Con Teaser Trailer.