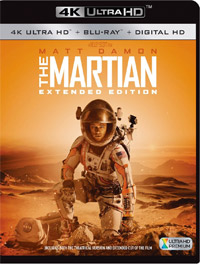 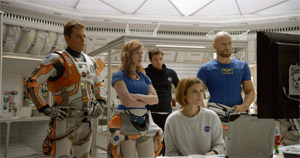 With all the action-laden bombast that is flickering across screens these days, it is easy to forget sometimes that good films do not really need to cater to the attention span of a ferret, wear capes or pull viewers with one explosive set piece after another. In the hands of a capable filmmaker, a single character can carry all the magic you need – and more. That is why “The Martian” is such a powerful film. It dials back the frenzy and settles into a rhythm of solid movie making that is captivating, engaging and highly dramatic. With the 4K Ultra HD version of the film and an extended cut as a bonus, I was eager to take a look at Ridley Scott’s magnificent movie once again.

Mark Watney (Matt Damon) is part of an exploration team on Mars, where the group is scheduled to do 31 days of scientific research before returning to Earth. However, a storm cuts their stay short and as the team struggles to get to the evacuation ship, Watney is hit by flying debris and disappears in the impenetrable dust storm. With his bio-signs also gone, the crew assumes he is dead and with no time to waste, leaves Mark Watney behind. 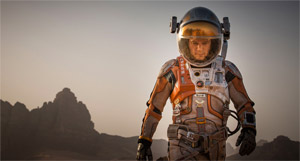 Only, Watney is not dead. While the computer in his suit was damaged – hence no bio-signs – he miraculously survived the incident, as a length of the antenna that had penetrated his suit and pierced his body, combined with his blood had sealed then suit and prevented him from dying.

Alone on a desolate planet, Watney slowly begins to make plans for his future survival. With limited rations and a potential rescue 4 years away, he needs to put all of his ingenuity and scientific knowledge to work to create a sustainable habitat for himself.

While the film centers firmly around Mark Watney, the movie is not a one-man show. As the story progresses, Watney manages to establish contact with Earth through rudimentary means and the story cuts back and forth between the stranded astronaut and the team on Earth trying to set up an expedited rescue mission to save their man. Without wanting to state the obvious, from the very beginning, it is a race against time. 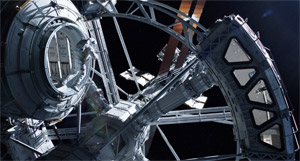 To me, “The Martian” was one of the best movies of recent memory. Not only because the story is so compelling, but because the film has such an incredibly lean and clean look. It never looks artificial, overblown or purposely epic, yet at the same time, it is one of the most epic movies around. The Martian landscapes and vistas are, frankly, breathtaking, but never in a way that would hit you over the head. They are an organic part of the film. For a film that is ripe with computer generated imagery, the fact that you never perceive any of it, that is quite an accomplishment. 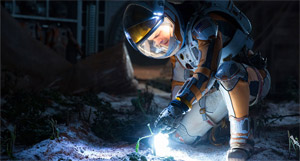 Naturally, I was extremely curious to see how this clean look transfers to an ultra high definition home theater presentation. Well… to be floored would be an understatement. On a scale of 1 to 10, I would seriously rate “The Martian” 11 for its phenomenal visual presentation. Because the film is so observant, rather than kinetic, the viewer has more time to take in the images as they slowly pan across the screen. And as such, it becomes much more powerful to admire the sheer amount of image detail that is present in this 4K transfer. The sharpness and the clarity are impeccable, as the transfer exhibits a contrast range that is easily the best I have seen in any home theater presentation to date. I can say this with confidence because with its often Mars-red uni-colored backdrops it is easily possible to examine the faithfulness and richness of the reproduction. Without any flaws or banding, the colors and hues appear never flat and are rich in tone and saturation in a way that we are simply not used to seeing on a television screen.

The release features a Dolby Atmos audio track, as well as a Dolby Digital 5.1 track for the 4K ultra high definition version, while a DTS 7.1 HD Master Audio track accompanies the Blu-Ray version that is also part of the package. 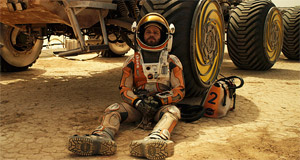 With Dolby Atmos – and DTS X – we have no reached a point where audio is simply as good as it could possibly be. With free 3D positional information built into the audio stream and lossless compression throughout, the quality of the experience is limited only by what the sound designers created and what your home theater is capable of. Degradation as a result of compression, bandwidth or hard channel downmixing no longer exist the same way they did in the past. As such, it comes as no surprise that the audio presentation on “The Martian” is as magnificent as it could be. Without flaws, we get an exact reproduction of the theatrical mix that contains a bombastic bass extension and crystal clear high ends. The entire dynamic range of the track is reproduced without the slightest hitch and every little detail is evident to the ears, just like every single grain of sand is visible to the eyes in the 4K transfer. This is, without a doubt, high definition at its very best, and for me “The Martian” will serve as a reference disc for all 4K UHD titles to come.

Naturally, the release contains a series of extras, including a commentary track by director Ridley Scott, Drew Goddard and author Andy Weir, which is present also on the 4K UHD version. All other supplements are found on a separate, third disc of the set. 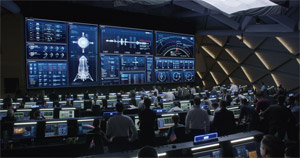 Among these extras, you will find a number of exciting and highly informative featurettes and documentaries. As with all Ridley Scott releases, every step of the process is painstakingly documented and put together in engaging documentaries that truly allow the viewer to partake in the lengthy process of filmmaking. Unlike much of the fluff you find as supplements on most releases these days, these featurettes actually have substance and structure, making them exceedingly interesting.

In addition, you will find a Gag Reel and Deleted Scenes on the disc, along with the original mission videos from the film, along with other little nuggets, each of which is well worth examining.

“The Martian” was not only a break-out book, but it was also one of the best movies of last year—a film the lends itself to be rewatched over and over again, making it an instant classic, I suppose. With this 4K Ultra High Definition version of the film in hands I can gladly say that you simply will not find any better version of the movie around, and to top it off, it includes both the theatrical cut, as well as an extended cut with an additional 10 minutes of footage inserted back into the film.

If you don’t own it yet, go get your copy now!