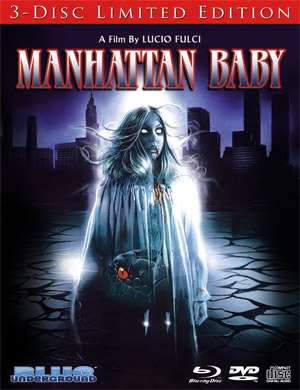 Blue Underground has added another cult horror film to its line-up, scheduling a brand new Blu-Ray version of Lucio Fulci’s Manhattan Baby for release in October.

A young girl on vacation in Egypt is given a mysterious charm, causing her archeologist father to be struck blind inside an unexplored pyramid tomb. But when the family returns home to Manhattan, a plague of supernatural evil and sudden violence follows. Can this ancient curse be stopped before it is unleashed on the streets of New York City?

The film has been newly transferred and fully restored in 2K from the original uncensored camera negative and comes fully loaded with exclusive new extras produced for this release! Don’t believe me? See for yourself…

Fulci & I is an interview with Composer Fabio Frizzi, serving as an hour-long career overview of the soundtrack collaborations of Fabio Frizzi and Lucio Fulci.

Beyond The Living Dead is an interview with Co-Writer Dardano Sacchetti, while Stephen Thrower on Manhattan Baby is a conversation with the author of “Beyond Terror: The Films of Lucio Fulci.”

“Manhattan Baby Suite” is a Live Studio Performance by Fabio Frizzi that is also included on the release.

Further, look for the movie’s Theatrical Trailer and a Poster & Still Gallery on the disc.

The entire release is rounded out by a Collectable Booklet featuring new writing by author Troy Howarth, and, perhaps best of all, a Bonus Soundtrack CD featuring the original motion picture soundtrack by Fabio Frizzi.