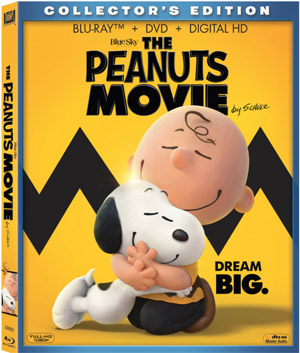 Twentieth Century Fox Home Entertainment has just added The Peanuts movie to its roster, scheduling a Blu-Ray and DVD release for of the animated film for March.

In “The Peanuts Movie”, good ol’ Charlie Brown, Snoopy, Lucy, Linus and the rest of the beloved Peanuts gang appear as you’ve never seen them before in a brand-new feature film from the imagination of Charles M. Schulz and the creators of Ice Age. Join everyone’s favorite eternal optimist, Charlie Brown, as he embarks on a heroic quest, while his beagle pal Snoopy takes to the skies to pursue his arch nemesis, the Red Baron. It’s a hilarious and heart-warming adventure!

The DVD version will be filled with bonus materials, suc has Snoopy Snippets, giving you even more of your favorite Peanuts characters in six all-new Snoopy Snippets, designed to righten your day!

Get Down With Snoopy and Woodstock Music Video will make you clap, dance and sing along with Snoopy, Woodstock and Charlie Brown to an all-new version of everyone’s favorite Peanuts song!

The Blu-Ray version will include all of these bonus materials also, of course, along with the Documentary You Never Grow Up Charlie Brown, in which you’ll learn about Charles Schulz, the history of the Peanuts gang, and their journey to the big screen!

Snoopy’s Sibling Salute will also be included on this version, a Snoopy family reunion as The Peanuts Movie filmmakers introduce viewers to Snoopy’s siblings: Andy, Olaf, Spike, Belle and Marbles.