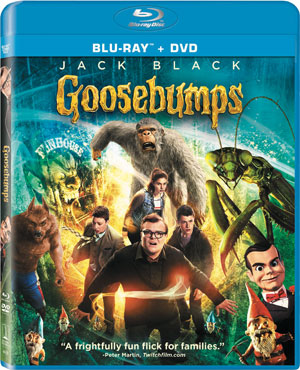 Sony Pictures Home Entertainment has added the latest Goosebumps movie to its roster, bringing the movie based on Scholastic’s best-selling book series by R.L. Stine to Blu-Ray Disc and DVD in January.

After moving to a small town, Zach Cooper (Dylan Minnette) finds a silver lining when he meets next-door neighbor Hannah (Odeya Rush), the daughter of best-selling Goosebumps series author R.L. Stine (Jack Black). Stine is very mysterious and a prisoner of his own imagination – the monsters that his books made famous are real, and he protects his readers by keeping them locked up in their manuscripts. When the monsters are accidentally unleashed and begin to terrorize the town, it’s up to Stine, Zach and Hannah to get them back in their books where they belong!

The DVD version will include the Beginners Guide to Surviving a Goosebumps Creature as well as the Featurette ”Strange Things are Happening…On-Set”.

The Blu-Ray version will contain the same two bonus features, but will further add to it an Alternate Opening and an Alternate Ending, as well as a number of Deleted Scenes and a Blooper Reel. In addition, you will find the Featurettes ”All About Slappy” and ”Creaturefied!” on the disc, along with a Casting Gallery.