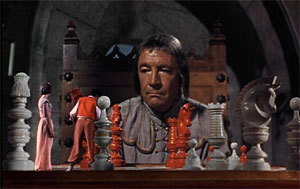 As 2015 shrinks in the rear view mirror, the home entertainment community welcomes 2016 with both optimism and ambivalence. Sure, there’s great excitement over the launch of yet another disc-based format, 4K Ultra HD Blu-ray. 4K Blu promises greater video performance, including four times the resolution, high dynamic range and increased color gamut. Doubt manifests in the hand-wringing over whether digital downloading has tipped the scales of antiquating packaged media for good. Next month’s Consumer Electronic Show might add clarity, but for now, there’s still plenty of content still to be released in ye olde 1080p HD Blu-ray.

In fact, if you’re into deep catalog cinema and television, 2015 was a banner year. Between Twilight Time, Kino Lorber and Olive Films, many of the old UA releases finally got some spinning disc love. Irwin Allen’s “Lost In Space” may not be respected by serious science fiction fans, but that didn’t stop Fox from releasing arguably one of 2015’s best-in-show titles with their 18-disc Complete Series box set. And Criterion seems to be on a tear these days. Every month they announce at least two titles that my library craves.

With the New Year, there’s the inevitable annual resolutions, to-do lists and general hopeful thinking for the next 12 months. In that spirit, I’d like to throw out to the CE universe what I would like to see released in Region A Blu-ray – maybe 4K Ultra HD Blu-ray? – starting January 1st.

I realize that these lists can reveal more about the compiler than invoke any aesthetic consensus. After considerable deliberation, wondering if I wanted to risk derision and ridicule for my selections, I concluded: Screw it. I like what I like.

Wishing everyone a safe and Happy Holiday season! Here’s hoping 2016 is a year of good health, much success, and great home viewing!