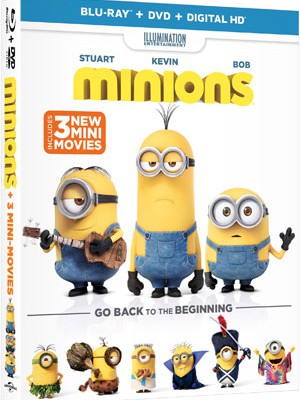 Universal Pictures Home Entertainment has just added Minions to its line-up, scheduling a Blu-Ray Disc and DVD release of the film for early December.

Since the dawn of time, Minions have served (and accidentally eliminated) history’s most despicable villains. Starting as single-celled yellow organisms, Minions evolve through the ages, perpetually serving the most despicable of masters.  Continuously unsuccessful at keeping these masters—from T. rex to Napoleon—the Minions find themselves without someone to serve and fall into a deep depression. With the tribe on the brink of collapse, three unlikely heroes—Kevin, Stuart, and Bob—embark on a journey to find a new big boss. When their quest leads them to their next potential master, Scarlet Overkill (Sandra Bullock), our three heroes must face their biggest challenge yet: saving all of Minionkind… from annihilation!

The DVD version will also include Deleted Scenes, as well as Jingle Bells Minion Style, the video that become an internet sensation in 2014.

The Blu-Ray version will also include Deleted Scenes and Jingle Bells Minion Style, along with Three All-New Mini-Movies, an Interactive Map and Nine Behind-the-Scenes Featurettes covering various aspects of the production. Further, the release includes Interviews and Art and 3D Model Galleries, along with the Behind-the-scenes Featurette ”Illumination Macguff Animation”, and Storyboards.