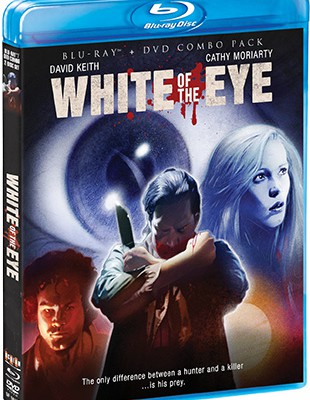 Shout! Factory just announced the upcoming release of the 1987 suspense thriller, White of the Eye, slating the film for release as a Blu-Ray/DVD Combo Pack in November through its Scream Factory label.

A twisted killer is on the loose. He tortures and dissects his victims as part of a primitive ritual. If you’re a wealthy, attractive woman, stay out of isolated desert community, because you are fair game. Housewife Joan White (Cathy Moriarty) gradually comes to suspect that her opera-loving husband Paul (David Keith) might know more than he’s letting on… All the clues lead to one man who is clearly innocent. But nothing is as simple as black and white in this suspense thriller by Donald Cammell.

You will also find a Commentary Track by Donald Cammell biographer Sam Umland on the release, as well as as selection of Deleted Scenes with commentary by Sam Umland.

“Into the White” is an Interview with cinematographer and steadicam operator Larry McConkey that is also included, along with an Alternate Credit Sequence and the Flashback Sequences prior to the Bleach Bypass process that gives them their unique look.

“White of the Eye” will arrive in stores on November 17 for $29.99. If you order the release directly through Shout! Factory’s website you will actually receive the disc two weeks ahead of its street date.