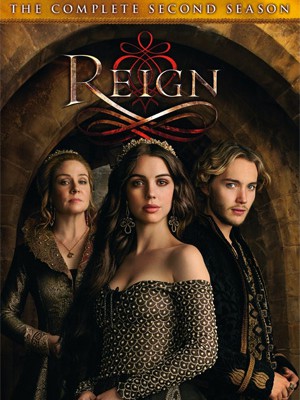 Warner Brothers Home Entertainment has added Reign: The Complete Second Season to its release line-up, bringing the television show to DVD in October.

The second season of Reign begins with Queen Mary and Francis on the throne of a nation burning. France is rocked by the aftereffects of the plague, a disease that creeps inside the castle walls, taking thousands upon thousands of lives across the land, and ravages the stability of a nation. From the ashes, powerful lords will rise, carrying out personal, religious and political vendettas, taking lives, and tearing at Mary and Francis’s commitment to each other, and their people. Friendships will be tested, loved ones murdered and betrayed. Meanwhile, a mysterious and deadly threat snatches victims from village streets and castle corridors; leaving evidence of savagery that looks like the work of monsters; mythical creatures who are the subject of nightmares, but who walk among us; doing the Devil’s bidding.

The five-disc DVD set contains all 22 one-hour episodes from the second season, plus never-before-seen extras including the Featurette ”Playing By Her Rules: A Day on Set with a Queen and Her Court”, which offers up a behind-the-scenes look on set for one day in the life of their favorite reigning Queen, Adalaide Kane, and her co-stars.

A selection of Deleted Scenes is also included on the release.

“Reign: The Complete Second Season” is scheduled for release on October 6 for $44.98.