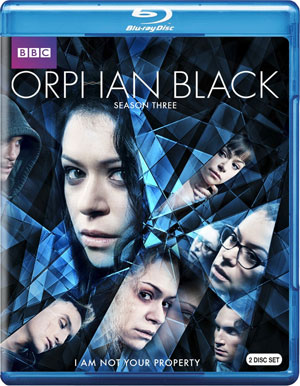 BBC Home Entertainment has just added Orphan Black: Season Three to its release schedule, lining up a DVD and Blu-Ray version of the TV show for August.

After neutralizing the threat by the DYAD Institute and the ruthless clone Rachel (Tatiana Maslany), Project Leda clones Sarah, Alison, Cosima and Helena, (Tatiana Maslany) are finally all united in their journey towards the truth of who and what they are. But new discoveries that include Helena’s kidnapping, a book that could contain the answers to their existence, and the most shocking discovery of them all – a set of treacherous militaristic male clones (Ari Millen) with an unknown agenda – will test how tight their new bonds are.

The release will come packed with extras, such as a Blooper Reel and a number of Featurettes, such as “Creating the Castor Clones,” a glimpse of a day in the life of actor Ari Millen, and the origins of the male clones, “The Rendition Camp: Behind the Walls,” a tour around the elaborate rendition camp soundstage led by co-creator John Fawcett, cinematographer Aaron Morton and VFX supervisor Geoff Scott, “Dissecting the Scenes,” the cast and crew of Orphan Black pull back the curtain to reveal the magic of creating Season Three’s four-clone scenes, “The Look of Orphan Black,” cinematographer Aaron Morton and director John Fawcett describe how they devised the distinctive look of Orphan Black and how it’s developed over the last three seasons and “Team Hendrix: Rockin’ the Suburbs,” Tatiana Maslany and Kristian Bruun dig into the strange appeal of the annual Alison/Donnie episodes.