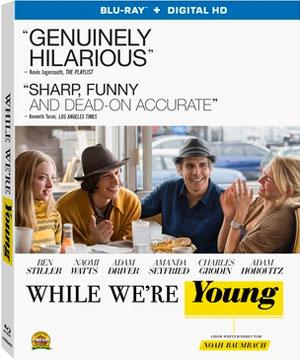 Lionsgate Home Entertainment has made a last minute addition to its release roster, scheduling the comedy While We’re Young for release on Blu-Ray Disc and DVD later this month.

After Josh (Ben Stiller) and his wife Cornelia (Naomi Watts) meet a free-spirited twenty-something couple (Adam Driver and Amanda Seyfried), they adopt a new lifestyle complete with hip-hop dance classes and mind-expanding parties. But with each hilarious attempt to act young, Josh and Cornelia start to appreciate the rewards of growing old together.

The release will contain six Behind-the-Scenes Featurettes covering various aspects of the film, such as “The Cast,” “Working with Filmmaker Noah Baumbach,” “Generation Tech,” “Working with Charles Grodin,” “Ayahuasca Ceremony” and “Hip-Hop Class”.