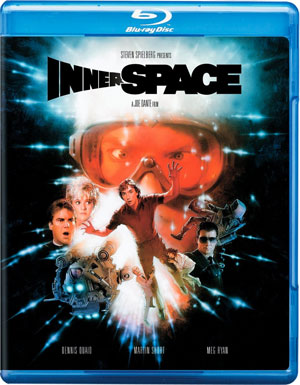 Warner Brothers Home Entertainment has just added a great catalog title to their release line-up, bringing the 1987 comedy Innerspace to Blu-Ray Disc for the first time in August.

Jack Putter (Martin Short) feels funny today, nothing new to this 25-hour-a-day hypochondriac. What’s new is that Jack hears something. “I’m possessed!” he cries, And you’re about to be possessed- by laughter. Gremlins executive producer Steven Spielberg and director Joe Dante again rev their imaginations into overdrive for this comic adventure that won a 1987 Best Visual Effects Academy Award®. The voice Jack hears is that of hotshot Navy pilot Tuck Pendleton (Dennis Quaid), subject of a secret miniaturization project gone awry and accidentally injected into Jack. And before frazzled Jack can say, “I‘ve got you under my skin”, his unlikely partner propels him into the craziest escapade of his life.

“Innerspace” will be available on August 4 for a family-friendly $14.99 only on Blu-Ray Disc!