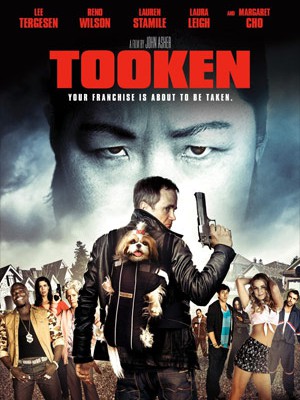 Cinedigm is trying to make you laugh by scheduling Tooken for release on DVD in July.

A satire based on the popular thriller franchise “Taken, ” “Tooken” sees Bryan Mills (Lee Tergesen) as an ex-CIA agent who is now working as a mall security guard. He keeps finding his things are being taken from him—his wife, his dog…his daughter’s virginity. Taking a satirical stab at Liam Neeson’s retired CIA character, Millis has been turned into a Prius-driving mall cop with a special set of skills, who joins forces with his ex-CIA mother to fight his nemesis BrownFinger (Margaret Cho) to free his family and a pound of dogs in danger of exploding.

Aside from the movie itself, the release will also include a Behind The Scenes Featurette, a Cribs Spoof with Reno Wilson and four Deleted Scenes. The disc is rounded out by the movie’s Trailer.