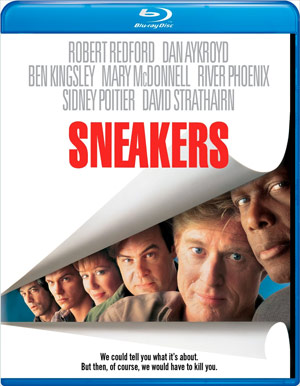 Robert Redford leads an all-star cast in Sneakers, one of the most satisfying cryptography thrillers ever embedded with espionage and betrayal. Computer expert Martin Bishop (Redford) heads a team of renegade hackers including a former CIA employee (Sidney Poitier), a gadgets wizard (Dan Aykroyd), a young genius (River Phoenix) and a blind soundman (David Strathairn), who are routinely hired to test security systems. When government agents blackmail the “sneakers” into carrying out a covert mission of tracking down a top-secret black box, Bishop’s team find themselves embroiled in a dangerous operation. Along with his former girlfriend (Mary McDonnell), they make a stunning discovery – the device has the capability to decode all existing encryption systems around the world. With factions from all sides willing to murder for the box, Bishop and his team embark on their most dangerous assignment ever.

Aside from a 1080p high definition transfer and a DTS-HD Master Audio 5.1 audio track, the release will also include a Commentary Track by Writer/Director Phil Alden Robinson, a Making-Of Featurette and the movie’s Theatrical Trailer.