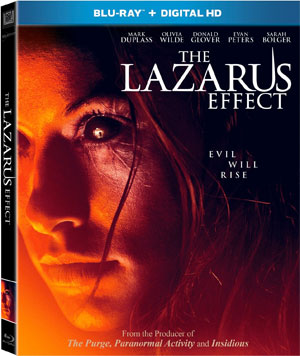 Twentieth Century Fox Home Entertainment has added the horror thriller The Lazarus Effect to its line-up, scheduling a Blu-Ray and DVD version of the movie for release in June.

A group of researchers led by Frank (Mark Duplass) and his fiancée Zoe (Olivia Wilde) have achieved the unimaginable: bringing the dead back to life. When Zoe is accidentally electrocuted in a horrific accident, Frank and his team use their experimental serum to resurrect her. But their attempt goes horribly wrong—unleashing terrifying powers within Zoe that put all of their lives in grave danger.

The DVD version will feature an anamorphic widescreen transfer of the film with Dolby Digital 5.1 audio track. As a bonus feature it will also include the Making-Of Featurette ”Creating Fear”.

The Blu-Ray version offers up a 1080p high definition transfer of the movie in its original 2.40:1 aspect ratio, accompanied by a DTS 5.1 HD Master Audio track. It will also include the Making-Of Featurette ”Creating Fear”, but will further add the Featurette ”Playing God: The Moral Dilemma” to the bonus materials, as well as a selection of Deleted and Extended Scenes. In addition, the Blu-Ray version will offer a DigitalHD version of the movie.