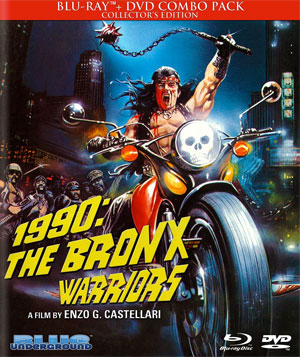 Blue Underground has some new titles in their pipeline and will bring 1990: The Bronx Warriors, as well as its sequel, Escape From The Bronx, to Blu-Ray in June.

It’s 1990 and the Bronx has officially been declared a “No Man’s Land.” The authorities have given up all attempts to restore law and order. When a beautiful young woman runs away from Manhattan into this wasteland of motorcycle gangs and marauding warriors, her corrupt father sends a ruthless mercenary to bring her back at all costs. But gang leader Trash has other plans, uniting the rival outlaws to wage an all-out guerrilla war against their corporate oppressors.

The action film “1990: The Bronx Warriors” by director Enzo G. Castellari will arrive as a Collector’s Edition with a new high definition transfer and a bunch of extras, spearheaded by a Commentary Track featuring Enzo G. Castellari.

In addition, the reelase contains Enzo G. Castellari and Fabrizio De Angelis In Conversation: Part 1, as well as the Featurettes ”Sourcing The Weaponry”, in which Enzo G. Castellari visits the Italian Weapons Rental House of Paolo Ricci, and ”Adventures In The Bronx” offering up an interview with Actor/Stuntman Massimo Vanni.

The disc will be rounded out by Theatrical Trailers and a Poster & Still Gallery. 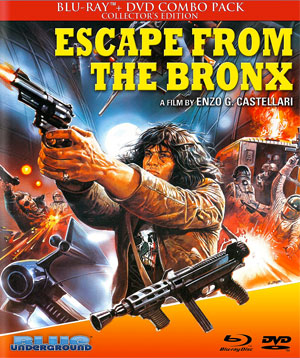 “Escape From The Bronx” is the sequel to the movie, also directed by Enzo G. Castellari. The year is 2000 and the Bronx has been reduced to a decaying, desolate wasteland infested with swarms of vicious street gangs and outcast scavengers. When an imperialistic mega-corporation plans to rebuild the doomed “No Man’s Land” into a perfect metropolis, they unleash their secret army of sadistic death squads to wipe out the few remaining inhabitants. But beneath the twisted rubble, fierce legions of resistance fighters arm themselves for the final onslaught – ready to die for their homeland. And ready to kill for it.

Further, look for a interview with Bronx Warriors superfan Lance Manley on the disc, called ”The Hunt For Trash”.

The disc will also be rounded out by Theatrical Trailers and a Poster & Still Gallery.