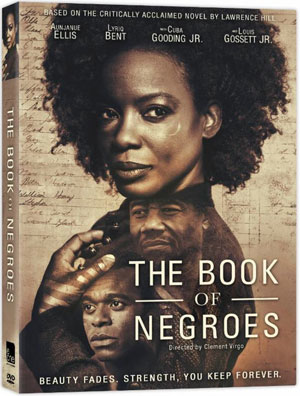 Entertainment One has added a powerful story of loss, courage and triumph to its roster, by scheduling the TV mini-series The Book of Negroes for release as a 3-disc DVD set in April.

An epic dramatic adaptation of the critically acclaimed novel by Lawrence Hill, “The Book of Negroes” depicts the extraordinary life of Aminata Diallo—an indomitable African woman who survives against all odds in a world that forever underestimates her.  Kidnapped by slave traders in West Africa and subsequently enslaved in South Carolina, Aminata must navigate her way through the American Revolution in New York, the isolated refuge of Nova Scotia and the treacherous jungles of Sierra Leone, before ultimately securing her freedom in England at the dawn of the 19th century.

Aside from the sweeping six-part historical drama, the DVD will also contain more than three hours of in-depth bonus features that allow you a look behind-the-scenes, deeper into history and into the minds of those involved in the production.

Extras include the Featurettes ”History of the Black Loyalists Society” and ”Amistad”, alonf with Ten Cast Interviews with stars Aunjanue Ellis, Louis Gossett Jr., Cuba Gooding Jr. and others. There will also be an exclusive Interview with best-selling author Lawrence Hill and 30-minutes worth of Deleted Scenes.
Additionally, the set contains a 28-page Collector’s Booklet featuring an exclusive essay.