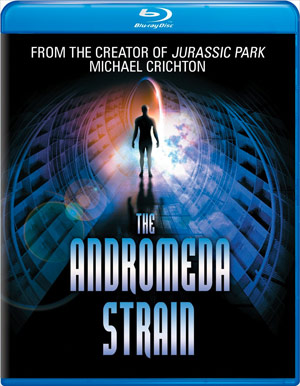 The 70s were a great era for science fiction films and when Universal Home Entertainment releases The Andromeda Strain on Blu-Ray Disc in July you will be able to remind yourself, just how good some of these films were.

Directed with clinical precision by Academy Award® winner Robert Wise, The Andromeda Strain is a compelling account of the earth’s first biological crisis.  After an errant satellite crashes to earth near a remote New Mexico village, the recovery team discovers that everyone in the town are victims of a horrible death, with the mysterious exception of an infant and an old homeless man.  The survivors are brought to a state-of-the-art underground laboratory, where the puzzled scientists race against time to determine the nature of the deadly alien virus before it wreaks worldwide havoc.  A trailblazer in the areas of special effects and inventive sets, The Andromeda Strain is based on Michael Crichton’s best-selling novel that created national paranoia for its topical relevance to the first moon landing and is perhaps the most chillingly realistic science fiction thriller ever made.

The release will offer up a 1080p high definition transfer of the movie, accompanied by a DTS 2.0 Mono HD Master Audio track. In addition, you will find a Making-Of Featurette on the disc, as well as A Portrait of Michael Crichton and the movie’s Theatrical Trailer.

“The Andromeda Strain” will be unleashed on July 14 and can be yours on Blu-Ray Disc for $19.98