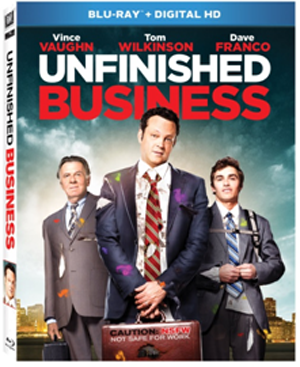 In this hilarious drink-like-a-fish-out-of-water comedy, Vince Vaughn stars as a hard-working entrepreneur who travels to Europe with his two associates (Dave Franco, Tom Wilkinson) to close the most important business deal of their lives. But the journey quickly spins out of control as the hapless trio encounters all kinds of crazy obstacles, including Oktoberfest bar brawls, hotel foul-ups, foreign GPS directions, and a global fetish festival. In the end, these guys gone wild might just land the deal… if they can survive the trip. Bottoms up!

The DVD version will also feature the Featurette ”Show Me Your Business”, in which Vince Vaughn, Dave Franco, Tom Wilkinson, James Marsden, Sienna Miller, and Nick Frost share their wildest, craziest and most memorable experiences on set. In addition, you will find a Hilarious Stock Photo Gallery of Vince Vaughn, Dave Franco, and Tom Wilkinson posing in office settings on the disc.

The Blu-Ray version features all of the aforementioned bonus features as well, but will also include 30 minutes of Deleted and Alternate Scenes.

You can get “Unfinished Business” on June 16 on Blu-Ray Disc with DigitalHD and on DVD.