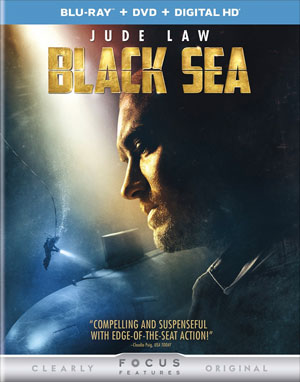 Universal Home Entertainment is currently putting the final touches on the adventure thriller Black Sea, starring Jude Law, readying the film for release on Blu-Ray Disc and DVD in May.

“Black Sea” centers on a rogue submarine captain (Jude Law) who, after being laid off from a salvage company, pulls together a misfit crew to go after a sunken treasure rumored to be lost in the depths of the Black Sea. As greed and desperation take control on board their claustrophobic vessel, the increasing uncertainty of the mission causes the men to turn on each other to fight for their own survival.

The DVD version will include a Commentary Track by Director Kevin Macdonald, as well as the Featurette ”A Dive into the Black Sea”.

The Blu-Ray version will also include the Commentary Track by Director Kevin Macdonald, and the Featurette ”A Dive into the Black Sea”, as well as a Digital Copy of the film.