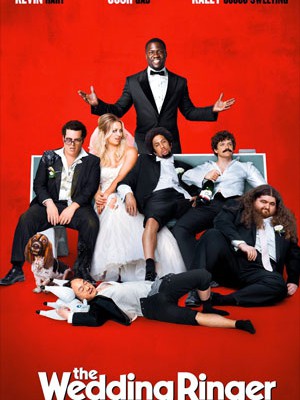 Sony Pictures Home Entertainment has just added the comedy The Wedding Ringer to its roster, lining up a Blu-Ray Disc and DVD version for release in April.

Starring Kevin Hart, Josh Gad & Kaley Cuoco-Sweeting, the film tells the story of Doug (Josh Gad) man. With less than two weeks to go until he marries the girl of his dreams, Doug is referred to Jimmy, who provides flattering best men for guys in need. What ensues is a hilarious wedding charade as they try to pull off the big con, and an unexpected budding friendship.

“The Wedding Ringer” will come packed with 15 Deleted Scenes and 5 Outtake Reels, along with 14 minutes of the cast’s Alternate Takes of jokes during filming.

Also included is Aloe Blacc’s Music Video, “Can You Do This,” and in addition, fans will have the chance to hear from the cast on their personal wedding disaster stories in the “Going to the Chapel of Love” Featurette.