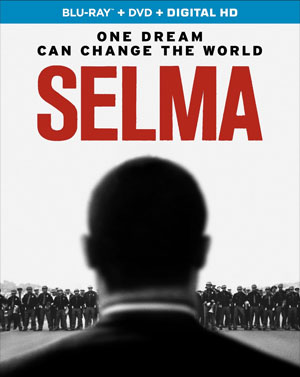 Marking the 50th anniversary of the legendary, history-making march, Paramount Home Entertainment has added Ava DuVernay’s moving epic Selma to its line-up, scheduling a Blu-Ray Disc and DVD for release in early May.

Embraced by critics and audiences alike, “Selma” was named one of the best films of the year by New York Times, New York Post, New York Magazine, Rolling Stone, Vanity Fair, Huffington Post, Entertainment Weekly, Variety, Hollywood Reporter and many more.  The film was nominated for an Academy Award® for Best Picture and won the Oscar® for Best Original Song for John Legend and Common’s compelling tribute “Glory.”

The film will be available as a DVD version, featuring the movie, along with a look at the National Voting Rights Museum and Institute and Selma Student Tickets: Donor Appreciation.

In addition, you will find Deleted and Extended Scenes on the release, as well as Historical Newsreels and the Featurette ”The Road to Selma”.

Also included is the Featurette ”Recreating Selma” and the “Glory” Music Video featuring John Legend and Common. The release is rounded out by a Photo Gallery and the National Voting Rights Museum and Institute and Selma Student Tickets: Donor Appreciation segments also found on the DVD.