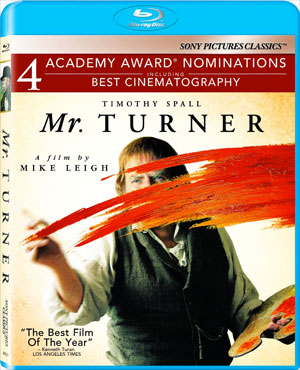 Featuring Timothy Spall as British painter J.M.W. Turner, the film is spanning the last 25 years in the life of Britain’s most revered painter. It is a remarkably rich portrait of a complex, contradictory man whose relationships with his family, fellow artists and lovers were often as turbulent as the canvases he painted.  Hailed as one of the best films of the year, “Mr. Turner” is a beautifully shot epic and stands as another masterpiece from Mike Leigh, the seven-time Oscar®-nominated director of “Another Year” and “Topsy-Turvy.”

The DVD version of the release will also include a Commentary Track by Writer/Director Mike Leigh, as well as a Deleted Scene and the Featurette ”Many Colours of Mr. Turner”.

Naturally, the Blu-Ray version includes the same bonus materials, but further adds the Featurette “The Cinematic Palette: The Cinematography of Mr. Turner” to the release for fans to enjoy.