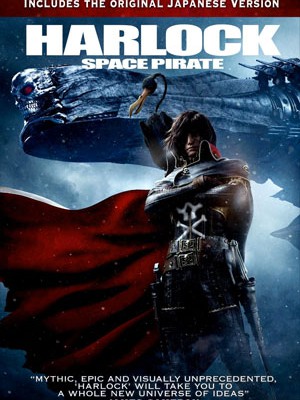 Based on the classic comic book and TV series, Ketchup Entertainment has unveiled details about the upcoming release of Shinji Aramaki’s action adventure Harlock: Space Pirate on DVD later this month.

A mysterious space pirate of the future, Captain Harlock, is determined to return his death ship and loyal crew to a battered Earth, which has been declared off-limits by the intergalactic Gaia Coalition. The rogue captain comes up with an incredible plan to go back in time to rescue Earth, but that includes the destruction of everything, as it exists. A young soldier of the Gaia Coalition volunteers to go undercover on the infamous skull ship and assassinate Harlock, but he soon discovers things are not as they seem. As dark secrets of the past are uncovered, the fate of the entire universe teeters on a very thin edge.

Thew release will feature an anamorphic widescreen transfer of the movie with Dolby Digital 5.1 audio in English and Japanese. As a bonus feature the release will also contain the original Japanese version of the film.