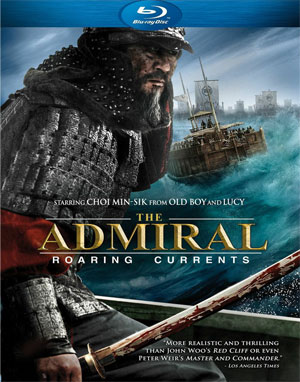 Independent publisher CJ Entertainment has just added the Korean movie The Admiral: Roaring Currents to its roster, scheduling the epic and stirring naval drama, which chronicles the real-life battle of Myeong-Nyang, for release on Blu-Ray Disc and DVD in April.

The Admiral is the brutal retelling of the battle of Myeong-Nyang, the legendary naval conflict that occurred during the Japanese invasion of Korea in 1597. On the 16th of September in 1597, Admiral Yi Sun-shin (Choi Min-sik) was left with only 12 battleships to face an insurmountable fleet of 330 Japanese battleships.  This battle and its result is the most well-known conflict in Korean history, as the Japanese military relentlessly charged towards the capital and the nation faced the possibility of losing the war.

One of the movie’s highlights is a gripping, critically acclaimed hour long sea battle sequence that has fascinated audiences when the film first appeared in theaters.

The DVD version will also contain Highlights, the movie’s Teaser and Trailer.

The Blu-Ray version will arrive with the same bonus features, but will also include a Making-of Featurette.