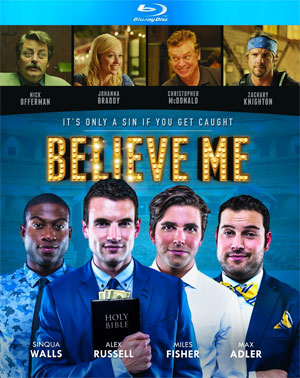 Virgil Films & Entertainment has added the faith-based comedy Believe Me to their roster, in which four college seniors set out to scam good-hearted churchgoers, scheduling a Blu-Ray and DVD version for release in March.

Sam (Alex Russell) stands on stage as thousands of fans go wild. Smart, charismatic and handsome, he moves them with his message, and when he calls for donations to his charity, the money pours in. The only thing is, Sam doesn’t believe a word he’s saying. Just months earlier, Sam was a typical college senior focused on keg stands, hookups and getting through graduation. But when a surprise final tuition bill threatens his dream of law school and leaves him thousands of dollars in the hole, he’s forced to think outside the box. Convincing his three roommates they can make a killing exploiting the gullible church crowd, Sam starts a sham charity to bring clean drinking water to Africa. The guys begin campaigning across the country, raising funds for a cause as fake as their spiritual message.

For Sam, embezzling money is easy compared to getting attention from the person he cares about the most. When Callie (Johanna Braddy), the tour manager and the object of Sam’s affection, finally uncovers the guys’ ruse, it’s Sam’s moment of truth. On the final night of the tour, before a packed auditorium but alone in the spotlight, it’s time for Sam to decide what he really believes.