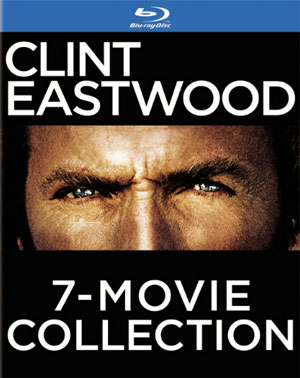 Universal Home Entertainment has just unveiled details about the upcoming release of a Clint Eastwood: The Universal Pictures 7-Movie Collection to celebrate the actor and director’s work with the studio. Arriving as 7-disc Blu-Ray and DVD sets, Universal will make the films available in May.

The “Clint Eastwood: The Universal Pictures 7-Movie Collection” will contain some of the star’s most underrated films, such as High Plains Drifter, The Eiger Sanction, Coogan’s Bluff, Play Misty For Me, Joe Kidd, Two Mules For Sister Sara and The Beguiled, offering up a solid mix of Westerns, comedies and dramas.

Most films will be included in bare-bones versions, containing only the movie’s Theatrical Trailer, much the way the previous DVD versions were released, each on its own disc in the set.

The only film with actual bonus features is “Play Misty For Me.” On this disc you will also find the Featurette ”Play It Again… A Look Back at Play Misty For Me”, as well as a Photo Montage.. Also included are the Featurettes ”The Beguiled, Misty, Don and Clint,” “Clint Eastwood on DVD,” “Clint Eastwood Directs and Acts” and ”The Evolution of a Poster”.

“Clint Eastwood: The Universal Pictures 7-Movie Collection” will be in stores on May 5 for $84.98 on Blu-Ray Disc, as well as on DVD.