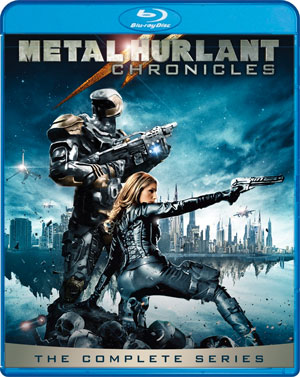 Shout! Factory has added Metal Hurlant Chronicles: The Complete Series to its release roster, giving you the chance to embark on a unique, comic-book inspired, journey beyond space, time and known worlds that await us when the highly celebrated live-action, sci-fi anthology his Blu-Ray Disc and DVD in April.

The last fragment of a living planet, reduced to dust by the destructive madness of its habitants, is condemned to roam the universe for eternity, bringing suffering and deception to those who cross her path. That damned messenger is called: The Metal Hurlant.  From 1960s cold war drama to distant future, fantasy to medieval, the live action sci-fi series “Metal Hurlant Chronicles” spans a wide range of self-contained stories linked together by an asteroid, called the Metal Hurlant, which passes close to the planet where each story is taking place, thereby changing the outcome.

The DVD version will arrive as a 2-disc set, that also includes a number of Featurettes and Cast Interviews.

The Blu-Ray version wil be released as a 3-disc set, that also includes Featurettes ad Cast Interviews. In addition, however, it will also feature footage from the San Diego Comic-Con Panel, a series of Alternate French-Language Episodes and Motion Comics.

“Metal Hurlant Chronicles: The Complete Series” will come to our universe on April 14 and can be yours for $34.93 on Blu-Ray Disc and $1997 on DVD.