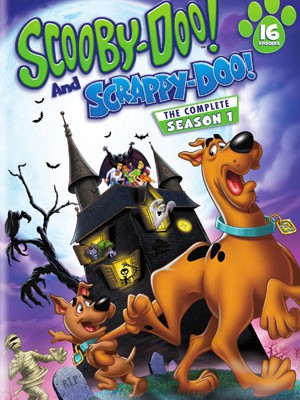 Warner Brothers Home Entertainment has just added Scooby-Doo! and Scrappy-Doo!:  The Complete Season 1 as an upcoming release to its catalog, scheduling a 2-disc DVD version of the 1979 television show for April.

Get set for hijinks, thrills and laughs as everyone’s favorite teenage sleuths, and their lovable Great Dane, set out for a chilling set of adventures along with their adorable companion, Scrappy-Doo. It is the action-packed animated series that features the Mystery Inc. gang, Fred, Daphne, Velma, Shaggy and Scooby-Doo, as they travel in the Mystery Machine investigating unexplained and supernatural shenanigans. They are joined by Scooby-Doo’s precocious, pint-sized nephew, Scrappy-Doo, a fearless little pup who boldly confronts the scariest of villains.

“Scooby-Doo! and Scrappy-Doo!: The Complete Season 1” contains all 16 episodes from the show’s first season, offering over 5 hours worth of Scooby-Doo! cartoons.